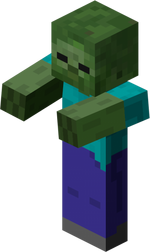 A Regular Zombie in Minecraft

"The Order of the Stone",
"Assembly Required",
"The Last Place You Look",
"A Block and a Hard Place",
"Order Up!",
"A Portal to Mystery",
"Access Denied",
"A Journey's End?" (Determinant),
"Hero in Residence",
"Giant Consequences",
"Jailhouse Block",
"Below the Bedrock"

A horde of Zombies outside The Mansion in A Portal to Mystery.

A zombie under PAMA's control spotted by Jesse and Petra.

A zombie under Jesse's control.

Hadrian and Mevia trapped in a world with chicken-sized zombies. (Determinant)

A Zombie in the Overworld.

Some Zombies with some citizens of Crown Mesa. They are both controlled by PAMA.

Petra in Episode 6 with a zombie behind her.