A Witch in Minecraft

"We should steer clear of it - nothing good ever happens when witches are involved."
—Ivor to Jesse in front of a Witch's Hut. src

A Witch is a dangerous mob and antagonist found in Minecraft: Story Mode. They mainly use splash potions to either attack the player or defend themselves from damaging effects from weapons, other potions, etc. They first appear in "​A Block and a Hard Place".

The Witch in her hut.

A Witch And Skeletons At The Swamp in Episode 4.

Jesse fighting a Witch in the Maze.

A Witch about to throw a potion at Jesse. 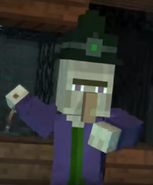 A Witch throwing a potion at Jesse.