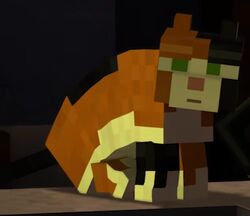 Winslow sitting on the table in the dining room.

Either Alive, Unknown, or Trapped

Winslow is a minor character in the episode, "A Portal to Mystery" of Minecraft: Story Mode. He is the pet cat and best friend of Cassie Rose.

Winslow appears to be a calico cat that has a black, white, and orange coat. He also has green eyes, and a pink nose.

Winslow was portrayed to be loyal to his owner, Cassie Rose. However, if Jesse doesn't give Cassie her cat, Winslow refuses to take fish offered to him by his master and walks away, showing he isn't too loyal under certain circumstances. He distracted Jesse's Gang when they were lighting the portal, proving to be very smart as well. He is also extremely mischievous, as he knocked the Enchanted Flint and Steel off the platform, and smiled while doing it. 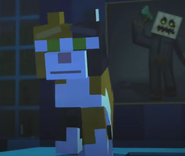 Winslow following Cassie Rose when she tries to escape the mansion.

Winslow and Cassie seeing zombies at the front door. 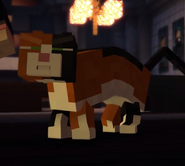 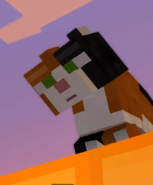 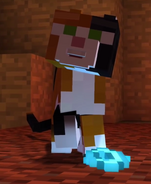 Winslow playing with the cyan Enchanted Flint and Steel.