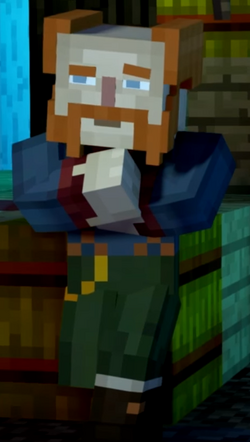 Willy is a character in Minecraft: Story Mode Season Two. He first appeared in "Below the Bedrock" and is the new caretaker of Waffles, Fred's former pet chicken. He is voiced by Yuri Lowenthal.

Willy has an orange beard, hair, and eyebrows, yellow suspenders, light blue pupils, is almost bald, and has brown shoes.

Retrieved from "https://minecraftstorymode.fandom.com/wiki/Willy?oldid=201329"
Community content is available under CC-BY-SA unless otherwise noted.