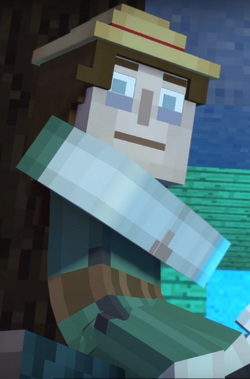 Wanda is a minor character and painter in Minecraft: Story Mode Season Two. She is able to give Jesse a Fred fact about how his favorite color was lapis-blue. She first appeared in "Below the Bedrock". She is also voiced by Julianne Buescher.

Wanda is mostly seen having her hands together from hurting her hands while painting. She has a yellow hat, brunette hair and eyebrows, light blue pupils, possibly gray paint under her eyes, a brown belt, and light green and white clothing. She also determinately mentions that she has blue underwear.

Wanda is a helpful and kind person. She gives Jesse white wool to help craft a painting. If Jesse crafts her a painting, she is grateful to Jesse, and, in return, gives a Fred fact: his favorite color was lapis-blue.

Retrieved from "https://minecraftstorymode.fandom.com/wiki/Wanda?oldid=153141"
Community content is available under CC-BY-SA unless otherwise noted.