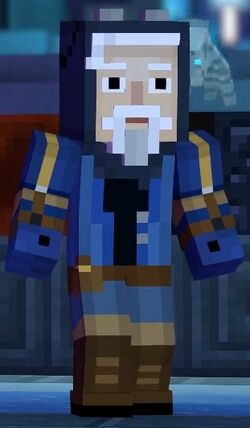 "Above and Beyond" (Romeo in Disguise)
Vos is a character who is heavily referenced in Minecraft: Story Mode Season 2. Though this is not revealed until near the end of "Giant Consequences", the real Vos is never actually seen in the game-his appearance and personality are assumed by Romeo as a disguise for two episodes. This fake Vos is voiced by Jean-Benoît "J.B." Blanc.

The real Vos' appearance is unknown but seeing as Jack immediately recognized Vos, despite him not being the real person and only a disguise, it is presumed that the form is extremely accurate. From what we see, Vos had a white beard, white hair and eyebrows, black pupils, a dark blue hood, gray goggles, and brown, blue, and gold clothing.

Not much is known about the real Vos' personality, but he appeared to be adventurous and friendly, as he went on adventures with Jack, Nurm, and Sammy. The fake Vos pretended to care for his friends, as he was shown acting worried for Jack when he gets hurt by a Prismarine Foe. The fake Vos also pretended to be scared of the Prismarine Foes, when in the Sea Temple in "Hero in Residence". In "Hero in Residence" he appeared to act friendly and lighthearted. That changed in "Giant Consequences", where he acted suspicious and hostile towards the rest of the group.

Jack and the real Vos were old friends before being split up, and Jack was traumatized after Vos and Sammy died. Jack was happy to reunite with the fake Vos and had a good relationship with him before discovering his real identity.

Not too much is known of Vos and Nurm's relationship, only that they were old friends before going to the Sea Temple, where the fake Vos was found.

Romeo tells Jack that the real Vos died in the Sea Temple many years ago before the events of "Hero in Residence". It is most likely that he was killed by Elder Guardians because Jack said that he saw Vos and Sammy die in the Sea Temple, and he was not surprised to see that Sammy was killed by an Elder Guardian. Romeo likely hid his inventory to convince Jesse, Jack, Petra, and Nurm that he was Vos.

"Vos" falling to the ground.

"Vos" in the Sea Temple.

"Vos" with Jesse which he's holding the Structure Block.

"Vos" with Jesse, Petra, Jack and Nurm during the fight.

"Vos" backing away from the fight in the Sea Temple.

"Vos" with Jack and Nurm. 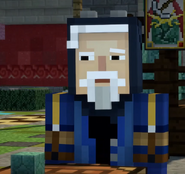 "Vos" talking to Jesse in Beacontown.

"Vos" being called out by Jesse (determinant). 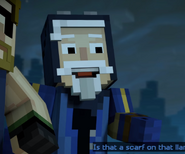 Vos along with Jesse, Petra, Jack, Radar, Stella, and Lluna in the Icy Palace of Despair.

Jesse preparing for another shooting challenge while Radar is spectating Jesse.

Radar seeing Jesse is about to get face-punched by piston. 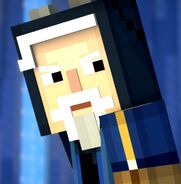 "Vos" before revealing himself to be Romeo in "Giant Consequences".