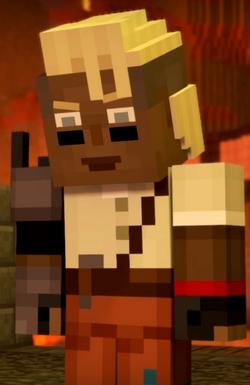 Guarding the Gates to Romeo's Challenge

Val has beach-blonde hair and eyebrows, gray pupils, black paint under her eyes, parts of armor, and orange pants.

Val is shown to be helpful, as giving Jesse, Petra, and Radar armor and weapons to fight against the dangers in Romeo's challenge.

Not much is known of Val and Soup's relationship, but they seem to be good friends.

Retrieved from "https://minecraftstorymode.fandom.com/wiki/Val?oldid=177586"
Community content is available under CC-BY-SA unless otherwise noted.