User:Order of the Command Block

Order of the Command Block 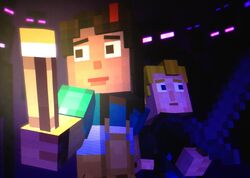 Order of the Command Block

Hello! I am an avid Minecraft Story Mode fan! I've been watching you all for a while, maybe you should look out your windows more... I'm kidding, I've been watching this wiki for a bit. I also have a million headcanons concerning Jesse and the command block. And they are awesome.

Here are the people I'm a fan of:

Lukas (He is adorable) "Easy, easy, easy, I gotcha"

Petra (Do NOT mess with the warrior) "We'll cover you!"

DanTDM (WHY IS YOUR HAIR CHANGING EVERY SCENE? PICK A COLOR!)"Cassie? how could you! We shared cookies together COOKIES!"

Stampy (I SHALL GIVE YOU THE CAKE!) "No sign of Cassie but- AH!"

Captain Sparklez (NOOOOOOOO! CAPTAIN!) "Who could have done this?!"

Ivor (Very thin line, sir, very thin line... but you're awesome) "Do you still not understand how dangerous it is!?"

Olivia (REDSTONE!) "I thought I was your best friend!"

Here are the people I don't like as much:

Cassie (I CALLED IT! I CALLED ITTTT!) "AND THERE IT IS JESSE, YOU'RE TRAPPED! STUCK!"

Gabriel (YOU LIAR!) "He's no friend of mine"

Ellegaard (Jerk.) You know what? SHE DOES NOT GET A QUOTE!

Aiden (YOU CRAZY KID! I can forgive you) "THIS IS MY WORLD, AND YOU RUINED IT!"

Times this game blew my mind

Lukas falls off into the void (I screamed SO loud)

Petra had no idea who she was.

Ellegaard dies (I thought she'd respawn until everybody got super upset)

My couch. It is a light gray couch with fluffy cushions and it is perfect for hiding under because plot. I like my couch.

It is the public chat fridge where we have all the plot foods you could want. Want a cookie? Go to the fridge! It'll be there! Because the fridge is always full of snacks.

A device used to attack people comically. It is very selective in injuries. Policia does not like my tree.

My car used to go buy snacks. I also have a Chat Man costume in there...somewhere...

My pink turret. Friendly fire is off.

He comes and narrates stuff for me when I tell him to. He works for me. He tries to pretend he hates everyone, but he does actually care for the others on chat; especially if Order cares for them. He's immortal unless I fire him or he entered an RP. He has powers of narration that let anything that he narrates happen.

Ranked #2
on this wiki