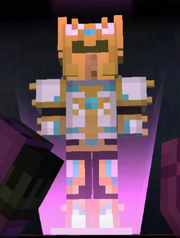 "Belongs to you now!"
—Emily to Jesse after she offers him/her the armor. src

Tim's Armor is a set of armor in Minecraft: Story Mode that appeared in "A Journey's End?". It supposedly belonged to Tim, and was kept in the palace of The Old Builders.

After Jesse is eliminated by Mevia and resurrected in the respawn zone, Emily, Axel, Olivia, Lukas, Harper, Ivor, Petra, and Slab the Immovable (determinant), come with weapons and Tim's armor. Jesse then dons the armor and enters the fight once more.

In "Hero in Residence", the armor is one of Jesse's choices when choosing his/her gear. It is described as having diamonds and gold in its design. It can be lost when Jesse is teleported to the Sunshine Institute. It later can be worn once more in "Above and Beyond".

Hadrian talking to Jesse, who's looking at Tim's Armor.

Tim’s armor in the Season 2 episode 5 finale.
Add a photo to this gallery
Retrieved from "https://minecraftstorymode.fandom.com/wiki/Tim%27s_Armor?oldid=170771"
Community content is available under CC-BY-SA unless otherwise noted.