Shot in the chest with an arrow

"You must be a special class of trouble to end up here... The Admin, well... This is where he sends the people who he has special plans for... You may have noticed... it's not a very nice place. And the people? Well... they're not very nice, either."
—The Warden talking to Jesse in the teaser trailer of Jailhouse Block. src

The Warden is an antagonist in Minecraft: Story Mode Season 2 and the former warden of the Sunshine Institute. His first and only appearance was in "Jailhouse Block". He was voiced by Donovan Patton.

The Warden was a griefer with Carmine before he arrived at the Sunshine Institute as a part of the "second group" of guests (people who Romeo sent to make sure that people who made him extra angry would be well-behaved). He became the Warden of the Institute by selling-out Carmine. Other than that, not much is known about his background.

The Warden is bald and has greyish-blue eyes. He wears a steampunk eye-patch and a military-like suit with a sash.

The Warden's voice can be heard explaining at the end of "Giant Consequences", sounding as a calm man who is explanatory and observant. The Warden is calm and is a manipulator and will go at great lengths (even if it means threatening people) to get what he wants, this is shown when he threatens to suffocate Radar to death if Jesse refuses to work with him. However, it is also determinantly revealed that he dislikes working at the Sunshine Institute and wants to leave as if he was an inmate.

After explaining that Xara used to be an Admin and that Romeo took her powers away, the Warden vowed that he would keep his promise to Romeo: that he will never let Xara escape. He threatens to ignite TNT on Jesse, Xara, Jack, Petra, Radar, Nurm/Lluna, and himself to keep that promise. However, before he can do so, Xara shoots him in the chest with an arrow. He promptly dies, dropping flint and steel, which is taken by Rob.

"Now, I said before that you could follow in my footsteps... that could start now. Ready to improve that pesky bad behavior of yours and join the good guys? Work for me as an associate and help bring order to these poor, chaotic individuals."
—Warden trying to recruit Jesse. src

"Did you know she was once an Admin, too?! The Admin had to take her powers away. She tried to destroy him! I promised the Admin I'd never let her free, no matter what. And I'll keep that promise! Even if I need to blow us ALL up to do it!"
—Warden's to Jesse's gang about Xara, his last words before dying. src

The Warden in the Mush Room.

The Warden talking to Romeo.

The Warden caught eating cake in the Zombie Mines. 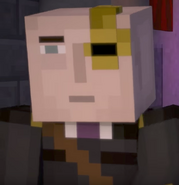 The Warden talking to Jesse about Romeo.

The Warden meeting Jesse in his office.

The Warden asking Jesse to close the door.

The Warden meeting Jesse in his office. 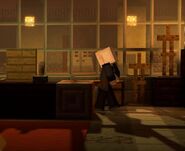 The Warden walking around in his office.

The Warden talking to Jesse.

The Warden angrily staring at Jesse for not joining the "Associates". (Determinant)

The Warden in his office.
Add a photo to this gallery
Retrieved from "https://minecraftstorymode.fandom.com/wiki/The_Warden?oldid=184743"
Community content is available under CC-BY-SA unless otherwise noted.