This article about a group of builders who are rivals of the main characters in the game. For the mob, see Ocelot.

The Ocelots are a gang of builders who first appear in "The Order of the Stone". They are founded and led by Lukas. The group were once disbanded when Aiden, Maya, and Gill left Lukas behind and formed The Blaze Rods. After Romeo takes over Beacontown, Lukas frees imprisoned townspeople and recruits them as new members.

The Ocelots are seen in formal attire, with matching leather jackets adorned with ocelot faces. However, they do have different shirts.

In Season 1, the Ocelots are a group of arrogant builders, although this behavior is not encouraged by Lukas. They are rivals of Jesse's gang, and always put them down and fight with them. Except for Lukas, they seem to be rude a lot and want to get rid of Jesse's Gang.

In Season 2, after Lukas recruits new members, the group become a rebel group against Romeo's dictatorship. They are hostile towards Jesse when they see them in the floating tower, but they turn friendly after they understand that Romeo was disguised as Jesse.

Maya, one former member of The Ocelots.

Aiden, one former member of The Ocelots and leader of The Blaze Rods. 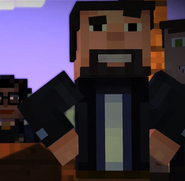 Gill, one former member of The Ocelots. 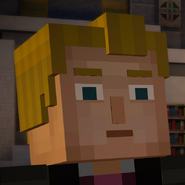 Lukas, the leader of The Ocelots. 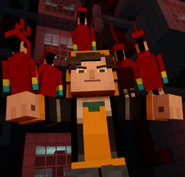 Stampy Cat, a member of the New Ocelots.

Nell, a member of the New Ocelots.

Stacy Plays, a member of the New Ocelots.

Wink, Stacy's companion who determinately becomes a part in the New Ocelots.

An unknown man who determinantly becomes a part in the New Ocelots.