"That is a lot of lava. And fire. And other things that could burn you to death."
—Olivia talking about the dangers of the Nether. src 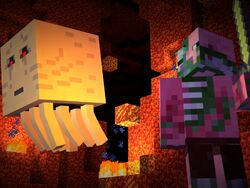 A Ghast and a Zombie Pigman in The Nether

Nether Mobs
The Nether is a hellish and dangerous dimension in the world of Minecraft. It can be traveled to by activating and walking through a Nether Portal.

The Nether is a hellish dimension that consists of oceans and waterfalls of lava, and most terrain consisting of netherrack and soul sand. It has no natural light, and all the light comes from lava, fire, and glowstone. It also contains Nether Fortresses made out of nether bricks. In addition, the nether is the only source of natural quartz and glowstone.

The Old Order of the Stone built a Nether Minecart System. Its purpose was to con​nect different members of the Order. These were very useful in cases of emergency and made traveling very reliable.

Jesse's gang riding the minecarts in the Nether.

The end of the minecart system leading to a portal.

Jesse's Gang in the Nether.

The portal inside the Nether to Boom Town.