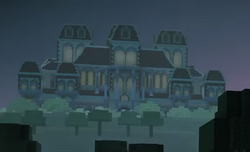 A view of The Mansion at night

"I humbly invite you to my mansion for an evening of food and festivities with your fellow adventurers."
—Invitation. src

The Mansion is a location in Minecraft: Story Mode that appeared in "A Portal to Mystery". It is owned by The White Pumpkin and is accessed by the golden Mansion Portal from The Portal Network.

The Mansion is a large house located in an unknown dimension with two moons, a swamp biome, and many zombies and spiders, along with a few other types of monsters.

The Mansion appears to be an extremely large building made out of mainly wood, nether bricks, and stone. The interior has many rooms including a kitchen, dining room, library, living room and others. The whole mansion is lined with secret passageways and booby traps. The front of the mansion features a wooden balcony and numerous sea lanterns used for lighting. The White Pumpkin possibly built it.

The mansion has a Portal Chamber underneath it, which is mostly made out of stairs and is accessed by going down a deep hole. In this basement, items of the deceased are collected, zombies are spawned, white pumpkins are grown, and a few more things. The White Pumpkin also keeps a fishing area and lots of cats down in the basement.

Alternative view of the Mansion.

A waterfall near the Mansion.

Kitchen window in the Mansion.

The White Pumpkin at The Mansion from a window.

A foggier view of the Mansion.

One of the rooms.

Another view of the kitchen.

Underground tunnels in the Mansion.

A small room leading to the shaft.

A bit of the main room and one of the portraits inside.