The Last Place You Look key-art

"A Block and a Hard Place"
"The Last Place You Look" is the third episode of Minecraft: Story Mode. It was released on November 24th, 2015. It is narrated by Billy West.

"In pursuit of answers, all our heroes found in Soren's armory was deceit and treachery. Locked in a dark chamber deep in Soren's mountain, as the Order of the Stone rides towards certain doom, our heroes must ask themselves... would they find a way out of this dark tomb...? Is there any way to cure Petra or Gabriel's wither sickness? Would they find a way to defeat the Wither Storm? Or would they remain trapped as it continues its ravenous rampage across the entire world? Only time will tell..."

NOTE: Choice percentages may change often.
D​id you save the amulet or your friends?

Did you follow Lukas through The End or lead the way?

Did you reveal or keep the secret?

Which armor did you take?

These choices may only be accessed if you linked your Telltale account with Minecraft: Story Mode. They appear on the Official Telltale Website.
What did you yell after Ivor when he run away?

Did you drop the Amulet or jump down into the dug hole?

Did you listen to all of Soren's records?

Did you become friends with Soren?

Did you save all the survivors?

A glitch where the top of the Wither Storm is not shown. 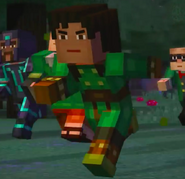 A glitch where male Jesse looks like a female.

Jesse's Gang at a portal to The End.