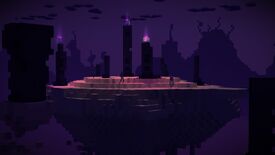 The End in the flashback

The End is an otherworldly dimension in the world of Minecraft. It can be accessed by using an End Portal.

The End consists of a giant floating island consisting mainly of End Stone.

There are a couple of Obsidian Towers with Ender Crystals standing on top of them. In the middle is an End Portal made of Bedrock.

Gabriel and Jesse going to find Soren in the End.

An Enderman belonging to Soren in the End.

Soren riding the Ender Dragon through the End.