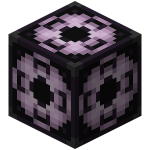 "Legend says it was a mighty tool that could grow civilizations like seeds, create cities in the blink of an eye. You need one of those to close your pit."
—Jack, about the Structure Block. src

The Structure Block is a block that can cause a certain build to be copied and then placed.

The Arrow Tower makes dispensers which shoots out arrows if an enemy is nearby. It's also been called "The Tower of the Warrior."

The Shield Wall will create a wall with obsidian to stop enemies from getting to its user, as they cannot punch through obsidian. It's also been called "The Wall of the Builder."

Jesse walking up the stairs to the Structure Blocks.