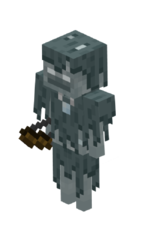 A Stray in Minecraft.

Strays appear similar to skeletons but have grey bones instead of white. They wear faded, worn-out clothes and a worn-out helmet. They also have white eyes.