Leader of Champion City,
"Associate" at the Sunshine Institute (formerly)

"I got your back, Jesse. Trust me. And take care of Lluna for me."
—Stella to Jesse. (Determinant) src

Stella is a main character, leader of Champion City and either the secondary antagonist or a tritagonist (determinant). She first appeared in "Hero in Residence" and is voiced by Ashley Albert.

Stella has platinum blonde hair (possibly bleached), tan skin, black eyebrows, olive eyes, black shoes, an earpiece, and different outfits as mentioned after. In "Hero in Residence", she also wore a long purple dress. In "Giant Consequences", she wore her business armor, the design being purple and gray stripes. In "Jailhouse Block", she wears a black associate outfit with purple patches on her shoulders.

Stella is a rude person who pretends to be nice and is unfair to the people who work for her. As mentioned by Petra, she's "manipulative" and "pretty fond of herself." However, Jesse and Petra find out that she wants to be just like them. Her actions in "Giant Consequences" reveal that she is highly ambitious, believing that the world runs on power. She is also an ungrateful person, choosing to side with Romeo, even though Jesse saved her. If the player chooses to do so, she has been shown to not care for animals, as shown when she orders a bodyguard to throw a puppy in "Hero in Residence" and hit Lluna in "Giant Consequences". However, Stella can be kind at times and promises to backup Jesse from Romeo if Jesse treats her well and allows her to join his/her team. Stella will have a complete change of heart if treated well, being much kinder and less rude; even promising to be a better person to Lluna if Jesse chose for her to keep her llama.

"Oh, look who it is: Jesse! Leader of Beacontown, and my sworn rival."
—Stella seeing Jesse. src

"That's right! It's Petra, armed with her mighty sword Miss Butter! Ha! And by her side is her best friend, the greatest hero in the world, Jesse! Together, they can take on--uhh… Hi! Hello."
—Stella pretending to be Petra before noticing Petra and Jesse. (Determinant) src

"Power is how the world is run, little man."
—Stella to Radar. src

"Wait, do I have this right? Are you telling me that this 'Admin' is so powerful he built all of this instantly?"
—Stella amazed at Romeo's abilities by building Icy Palace of Despair. src

"You heard the Admin. He only wants the best of the best, and that's going to be me."
—Stella challenging Jesse's gang. src

"I could've found that clock, obviously, but there was some signage that was very confusing, and well... I, you know, wound up here. Kept hoping the Admin would drop by so I could explain the confusion. But when we do talk, you better believe that he's going to realize I am the perfect friend and partner for him."
—Stella being trapped in ice. src

"Oh, curse your flawless logic! Fine! But don't ever ask me for anything else, ever again."
—Stella giving Jesse cobblestone and stick to make a lever. (Determinant) src

"Good news, Jesse. You're not my rival anymore. Since you're gonna rot down here forever, you're... nothing, now."
—Stella to Jesse. (Determinant) src

"You brought this on yourself, Jesse. I don't get it. You could've just joined the Admin and never had to suffer a second. Instead you chose to throw it all in the lava pit. I think all those people cheering for you 24/7 have made you delusional. Made you think that you can just... change the world, heh. It's sad is what it is."
—Stella to Jesse about their decision to defy Romeo. src

"I do not know what kind of mind games you are trying to bring into our rivalry, but I'll tell you now they are not going to work on me."
—Stella if Jesse corrects her. (Determinant) src

"Oh, Jesse. That sort of reverse psychology isn't going to work on me. Especially not from my own rival."
—Stella to Jesse in the Icy Palace of Despair. (Determinant) src

"Don't know, don't care. Do your job."
—Stella to Jesse in the Zombie Mines. (Determinant) src

"Careful, Warden. This one's crafty with the mind games."
—Stella to The Warden. (Determinant) src

"If you're happy, I'm happy."
—Stella to Jesse, when she joins Jesse's Gang. (Determinant) src

"Jesse! Back so soon? Since when do you...? You're not the Admin, are you? Hmmm. Hmmmm. HMMMMMM!?"
—Stella to Jesse, doubting that they are Romeo. src

"No, Lluna! Bad! That is the real Jesse. We don't like the real Jesse, remember? So let's just ignore these losers and be on our way, hm?"
—Stella to Lluna when Jesse treated Stella badly. (Determinant) src

"Good girl, we're going to rebuild Champion City together and it's going to be wonderful!"
—Stella to Lluna when Jesse left Lluna in the Sunshine Institute and she leaves Jesse. (Determinant)

Stella in Champion City with Rodrigo and another guard. 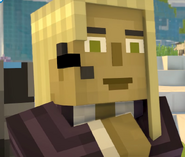 Stella talking to Jesse and Petra.

Stella reacting to Romeo's Gauntlet glowing for the first time

Stella in her treasure hall (determinant).

Stella after noticing that the moon is stuck.

Stella along with Jesse, Petra, Jack, "Vos", Radar, and Lluna in the Icy Palace of Despair.

Stella talking to the Admin while trapped in ice 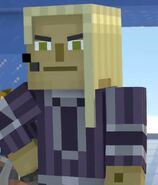 Stella in her business armor.

Stella with Romeo, but telling Jesse she appreciates him/her saving her (determinant). 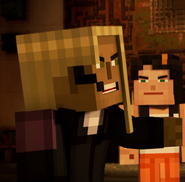 Stella talking to the Warden.

Stella with Lluna in their associate outfits talking to Jesse

Stella about to go with Admin Jesse

Stella with Axel, Olivia, and Romeo. 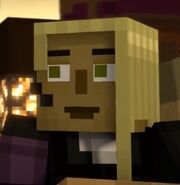 Stella and Lluna in "Above and Beyond".

Unused model of Stella in a "Guest" outfit.