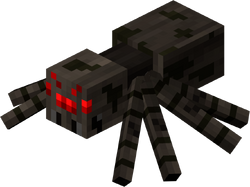 A Spider in Minecraft

Spiders are hostile mobs that appear in Minecraft: Story Mode.

Spiders have dark gray skin and are about one block tall. They have red eyes that glow in the dark and eight legs.

Cave Spiders, the smaller and more dangerous version of Spiders.

Jesse, LDShadowLady, and DanTDM fighting some spiders in The Mansion.

LDShadowLady being killed by Spiders. (Determinant)

Spiders, as well as their smaller counterparts chasing Jesse in a teaser for Hero in Residence.