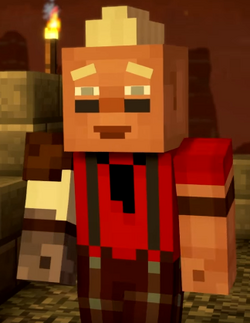 Soup is a character in Minecraft: Story Mode, Season Two. She and Val guard the gate to Romeo's challenge, which is on the way to Fred's cabin, inside Romeoburg. She first appeared in "Below the Bedrock". She is voiced by Katie Chonacas.

Soup has beach-blonde hair and eyebrows, gray pupils, red clothing, straps on her clothing, black paint under her eyes, and parts of armor on herself.

Soup is a helpful person, as shown when she helps Jesse, Petra, and Radar prepare for Romeo's challenge. She is also lazy, wanting Jesse to build her a structure to scare off others that visit the gates to Romeo's challenge, instead of doing it herself.