For the block in Minecraft, see Slab (Block).

"In my life, I've done some things I'm not proud of. But I won't work for bosses who use people, or manipulate them. That's inconsiderate. But you? When I was mean to you, pushed you around and made you go to the tower with me? You got that I was just doin' my job and came anyway so we could be on time. That was real considerate."
—Slab joining Jesse. (Determinant) src

Slab the Immovable, more commonly referred to as Slab, is a character in Minecraft: Story Mode that appears in "A Journey's End?". He is voiced by Christopher Duncan.

Slab has a muscular 2.5 block build. He wears black and white armor with spikes and a horned helmet. He also wears black war-gloves.

Slab, being the head of the gladiators, likes being in-charge and does not like being pushed around, or being told what to do. However, he is shown to be grateful, and appreciates Jesse if he/she shows him appropriate respect.

When fighting against Hadrian and Mevia, Slab will push Jesse out of the way of the TNT and then sacrifice himself on top of the TNT. However, this is only if Jesse listens to Slab on the way to Hadrian's Palace and doesn't insult the Gladiators during "The Walls." He then later respawns.

"There are some fascinating and thrilling tales in here."
—Slab talking about Lukas' Journal to Jesse. (Determinant) src

"It was an honor to fight beside you--"
—Slab to Jesse. (Determinant) src

"Let me finish! You made me late when I was just trying to do my job."
—Slab to Jesse. (Determinant) src

"Now we're going to be late, and I'm going to get in trouble!"
—Slab mad at Jesse for making him late for his job. src

"Jesse, COME ON!"
—Slab to Jesse when he/she is about to make him late for his job. src

"Big lug? That is just straight up insulting. I am big and beautiful. Go get some manners!"
—Slab to Jesse. (Determinant) src

"There was some good stuff in there. I was really moved."
—Slab giving Lukas back his journal. (Determinant) src

"We hit 'em, crush 'em, and send 'em to the mines."
—Slab talking about what happens to competitors in The Games. (Determinant) src

"And I like to read slow to enjoy it better."
—Slab when reading Lukas' Journal. src

"You know, I've sent hundreds of competitors to these respawn pits... Never knew it hurt so much."
—Slab to Jesse after they both respawn. (Determinant) src

Slab telling Jesse that he is immovable. (Determinant)

Slab about to fight Jesse in Gladiator Junction. 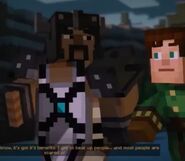 Jesse and Slab in Hadrian's Palace.

Slab pulling Jesse away from his friends.

Slab confused on what to do at "The Walls."

Slab, Facemeat, Clutch, and Beefy Dude thinking if they should fight with Jesse.

Respawned Slab without his helmet and shoulder-pads. (Determinant)