"I can't leave my subjects in whatever trouble they're in."
—Isa to Jesse about her people in trouble. src

Some of the people have different varities of clothing in Sky City.

Some of them are nervous, some of them want to be free to build, and some just hide from Jesse's Gang. 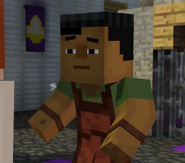 Some townspeople about to jump off Sky City.

Phillipe, a townsperson, and bartender of Milo's inn.

Milo, a citizen of Sky City. 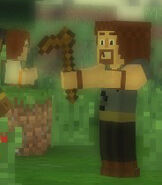 One of the townspeople holding a wooden hoe.