Reginald (with Benedict) and other guards during Sky City's destruction, along with Maya.

Sky City Guards are officers who help protect Sky City in Minecraft: Story Mode. They first appeared in ​"Order Up!".

The guards usually wear special uniforms, mostly brown and gold. They wear a hat with a gold egg on it, and have black boots. They also appear to be wearing white gloves.

There are other guards in Sky City, but their jobs are unknown.

"Don't worry, everyone, your turn will come in time. Please have your materials ready when you approach the crafting table."
—The Crafting Table Guard telling everyone in line. src

Reginald - the captain of the Sky City Guards. 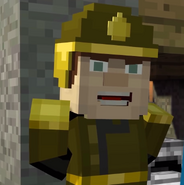 The Furnace Guard checking the schedule.

The Garden Guard getting attacked by Zombies.