A Skeleton in Minecraft

"The Order of the Stone",
"Assembly Required",
"The Last Place You Look",
"A Block and a Hard Place",
"Order Up!",
"A Portal to Mystery",
"Access Denied",
"Giant Consequences"

Classic, 0.24_02
Skeletons are hostile mobs in Minecraft: Story Mode that attack people by shooting arrows at them.

A Skeleton about to fire an arrow. 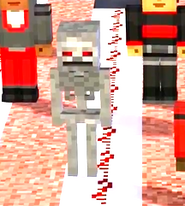 A Skeleton in the forest.

Some Skeletons preparing to fire at Jesse's Gang.

A Skeleton inside Soren's Mob Grinder.

A skeleton shooting arrows at Reuben.