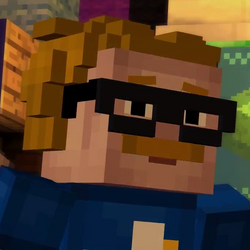 "My poultry! My precious poultry!"
—Sigge after Jesse broke his chicken machine. src

Sigge is the owner of the Chicken Machine at EnderCon. He is voiced by Billy West.

He wears a blue T-shirt with a chicken on it, olive colored pants, and black shoes. He has ginger-blond hair and wears black glasses.

He is seen disliking people who mess around with his chicken machine. Other than that, his personality is not explored.

Jesse trying to get to Sigge's chicken machine.