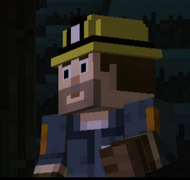 Sebastian is a minor character in Minecraft: Story Mode who appears in "A Journey's End?". He is a miner in the quartz mine in The Old Builders' world.

Sebastian has light brown hair, black eyes, and slightly pale skin. He wears a yellow hard-hat and a blue miner outfit with a white shirt underneath.

Sebastian is portrayed to be a quirky and appreciative person. He seems to be willing to risk everything to meet Jesse and seems to worship him/her.

"Jesse, I need to talk to you!"
—Sebastian to Jesse. src

Sebastian looking sad when Jesse walks away to Slab. (Determinant)

Sebastian coming from the portal.
Add a photo to this gallery
Retrieved from "https://minecraftstorymode.fandom.com/wiki/Sebastian?oldid=182575"
Community content is available under CC-BY-SA unless otherwise noted.