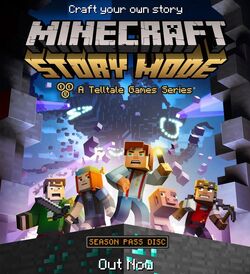 Adventure Pass
The Season Pass is the first part of the first season in Minecraft: Story Mode. It contains Episodes 1 to 5.

Retrieved from "https://minecraftstorymode.fandom.com/wiki/Season_Pass_(Season_One)?oldid=178085"
Community content is available under CC-BY-SA unless otherwise noted.