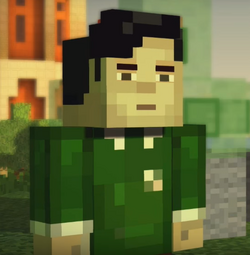 The Schoolboy is a minor character who determinately appears in "Assembly Required" in Redstonia.

The Schoolboy appears to be a young, school-going person. He wears a green top and light brown shorts.

The Schoolboy is portrayed to be a young inventor who invented the Robot, which he is proud of, and thus appears to be very vain when talking to Jesse. He also appears to hold a grudge against Disco Mickey.

Retrieved from "https://minecraftstorymode.fandom.com/wiki/Schoolboy?oldid=201105"
Community content is available under CC-BY-SA unless otherwise noted.