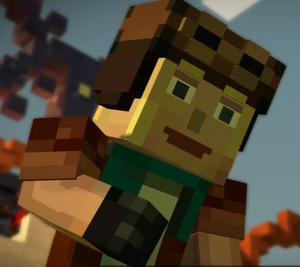 "That's OK. Now that the fear has completely paralyzed me, I'm almost enjoying myself!"
—Sandy to Jesse after he/she activates the Flying Machine. src

Sandy is a minor character in Minecraft: Story Mode​ and a resident of Redstonia. She first appeared as a determinant character in "Assembly Required", who invented the Flying Machine. She is voiced by Ursula Taherian.

Sandy is an adventurous and risky woman, since she created a flying machine but has a fear of heights. She is also a kind, friendly, and smiley person.