Minecraft Story Mode Wiki
Register
Don't have an account?
Sign In
Advertisement
in: Locations, The Underneath, Towns

"Seriously? What kind of name is 'Romeoburg'?"
—Jesse. src

At the bottom of the Overworld

Romeo (formerly),
Soup,
Val,
Xara (formerly),
Fred (formerly)
Romeoburg is a town built by Romeo that was named after him.

It is guarded by a large gate and two guards, Soup and Val. The area surrounding Fred's cabin, located below the surface, resembles the Overworld. 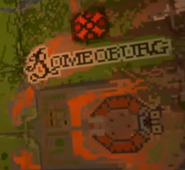