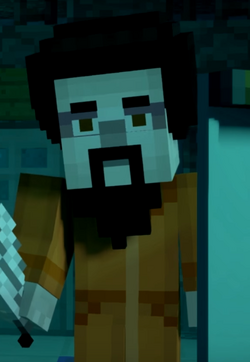 "Jailhouse Block"
Rob is a minor character in Minecraft: Story Mode Season 2 and is a "guest" at the Sunshine Institute. He first appeared in "Jailhouse Block" and is voiced by Mark Barbolak.

If Jesse says Rob's "painting" of a mushroom is good, he is happy and calls Jesse a friend. If Jesse says they don't like it, Rob will be angry, and later calls them, "That happy, little jerk who didn't like my happy, little painting."

Rob in the Mush Room.