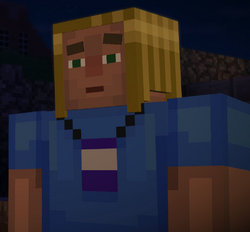 Reuben, the usher, in "The Order of the Stone".

For the pig, see Reuben (Pig).

"I hope your mission came with tickets to the show? 'Cause, I mean, otherwise... heh-heh."
—Reuben to Jesse's Gang. src

Reuben is a minor character in Minecraft: Story Mode. He is an usher who worked at EnderCon. He stands guard in front of the main hall where Gabriel was. His name is revealed in "A Journey's End?", when Hadrian and Mevia, only knowing that Jesse had a best friend named Reuben and not his species, captured him. He is voiced by Jason "jtop" Topolski.

Reuben appears to be 2.5 blocks tall, similar to Axel, Emily, and the gladiators. He wears a blue shirt that has an Ender Dragon face on the back and has ginger-blond hair. Reuben also wears to what seems to be a EnderCon employee pass on his neck.

Reuben seems to be a very relaxed person who takes his job quite seriously. He wants to look cool and level-headed, and often tries to give witty replies to people talking to him. He also seems to be afraid of chickens.

"I'm sorry, but... no tickets, no show."
—Reuben when Jesse talk about nothing. (Determinant) src

"Yeah, I hope your mission came with tickets to the show, 'cause otherwise..."
—Reuben to Jesse's Gang. (Determinant) src

"You guys big Gabriel fans or something? Too bad it's sold out."
—Reuben to crowd. src

"Heh, yeah, funny story. Name IS Reuben but, yeah. Not a pig."
—Reuben when he is in the Obsidian prison. (Determinant) src

"It's gone, you're totally fine, you're a totally cool dude."
—Reuben to himself after seeing a Chicken.  src

"Keep your eyes closed! They'll peck out your eyes!"
—Reuben warning everyone about Chickens. src

Petra: "What would it take to get us inside tonight?"
Reuben: "Uh... tickets... heh-heh..."
Reuben: "That was a good one. You should laugh."
—Reuben and Jesse's Gang at EnderCon. src

Reuben, Gabriel the Warrior and another usher at EnderCon.

Reuben and Gabriel passing by some fans at EnderCon. 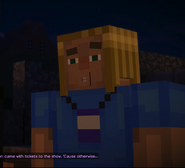 Reuben saying to Jesse's gang that they need tickets.

Reuben yelling at Jesse's Gang for going inside the EnderCon dome without tickets. 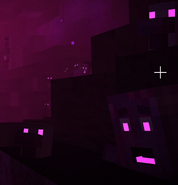 Reuben in the Wither Storm withered.