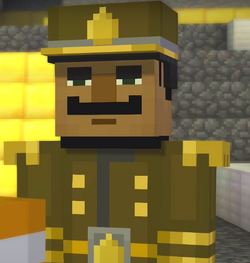 "Now you listen here! I'm the Captain of the Guard--you can't just talk to me this way!"
—Reginald to Aiden. src

Reginald, also nicknamed "Reggie", is a character in Minecraft: Story Mode. He first appears in "Order Up!" as the captain of the guards in Sky City. He is voiced by Sean Astin.

Reginald, like most other members of Sky City's guards, appeared to wear formal brown clothing laced with gold. He also has a thick mustache.

Reginald takes his position as the captain of Sky City's guards very seriously, and is devoted to helping The Founder maintain peace and order. He is later also revealed to be a stickler for the truth, and always does what he thinks is the right thing to do.

"Captain Reginald, at your service."
—Reginald introducing himself to Jesse. src

"Oh, wow, what is this?"
—Reginald to Jesse. (Determinant) src

"You're alive, you're alive! Is the Founder with you? I- ARGH!"
—Reginald to Jesse. src

"You're delusional, Aiden! The people of Sky City will never bow to you! You killed the Founder!"
—Reginald to Aiden. src

Reginald holding Benedict during the attack of Sky City.

Reginald in the throne room, cheering at Jesse being alive.