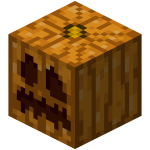 A Regular Pumpkin in Minecraft

"I suppose that could be useful if we run into Endermen."
—Jesse. src 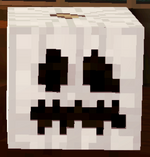 "Uh, yes, I was, And I almost had him until, y'know, he took me by surprise and stuffed this pumpkin on my head."
—Lukas to Jesse after getting framed by the White Pumpkin. (Determinant) src

Jesse taking a pumpkin in the Temple of the Old Builders.

A farm of white pumpkins.

A bugged scene with invisible Lukas, which makes the pumpkin float in midair.

The White Pumpkin on a Crafting Table.

Cassie Rose wearing a white pumpkin.
Add a photo to this gallery
Retrieved from "https://minecraftstorymode.fandom.com/wiki/Pumpkin?oldid=180932"
Community content is available under CC-BY-SA unless otherwise noted.