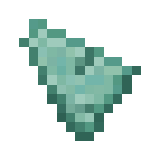 A Prismarine Shard in Minecraft

Ivor
Jesse (Temporarily)
The Order of The Stone (Formerly)

"We used most of these to craft a Sea Lantern. This is all that remained."
—Soren to Jesse. src

A Prismarine Shard is an item in Minecraft: Story Mode. It is a material used in crafting sea lanterns. They are dropped by guardians and elder guardians upon death.

Retrieved from "https://minecraftstorymode.fandom.com/wiki/Prismarine_Shard?oldid=174126"
Community content is available under CC-BY-SA unless otherwise noted.