"Hero in Residence",
"Giant Consequences",
"Above and Beyond"

Prismarine Colossus is a type of boss mob in Minecraft: Story Mode, Season 2. They are a larger version of Prismarine Foes.

Romeo's Colossus in the Sea Temple. 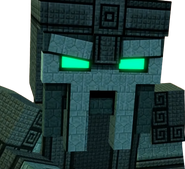 Romeo's Prismarine Colossus, which is directly controled by Romeo.

A Prismarine Colossus seen near portal of the Terminal Space.

Add a photo to this gallery
Retrieved from "https://minecraftstorymode.fandom.com/wiki/Prismarine_Colossus?oldid=184596"
Community content is available under CC-BY-SA unless otherwise noted.