A Nether Portal leading to Redstonia

For the portal used to access to The End, see End Portal.

"We landed here after jumping through a portal, a sort of doorway connecting different worlds."
—Jesse to PAMA (determinant). src

Gabriel has a Nether Portal inside his Temple which Jesse's Gang and Ivor use it to escape from The Wither Storm.

"The Last Place You Look"

Jesse's Gang enter an End Portal to look for Soren the Architect in The End. Later, they exit out through the same End Portal.

When escaping the Wither Storm, Jesse can suggest to build a Portal but realize that the group doesn't have enough materials to build one.

The gang finds the exit portal to the Overworld.

When searching the room of the Sea Temple holding the Structure Block, Jesse notices a inactive Portal/terminal frame.

There is a Terminal in the background of the clock room at the top of the icy palace of dispare. When climbing to the top using the obsidian, it can be seen at the top to the left.

Xara explains to Jesse about the terminals she built in order for the Admins to visit each other. One of the said portals can be seen in the Oasis.

Later, Jesse and the gang use a portal to get back to the Overworld.

Jesse and the gang uses a portal hidden in Romeo's tower to get to the Terminal Space. Later, they use the same portal to get back to the Overworld.

A Nether Portal in Gabriel's Temple.

A Portal hallway full of portals.

Jesse pulling Lukas out of the Fancy World Portal.

Jesse's Gang in the Portal Network.

CaptainSparklez in the Portal Network.

Jesse activating the secret path to get the Atlas.

Oak Wood Portal, the Order of the Stone's homeland. 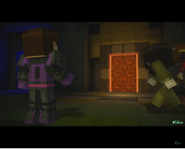 Jesse's Gang about to go through the portal leading to the dimension where they live.

The End Portal.
Add a photo to this gallery
Retrieved from "https://minecraftstorymode.fandom.com/wiki/Portals?oldid=152971"
Community content is available under CC-BY-SA unless otherwise noted.