Otto with the Portal Atlas

"Now when we built this place, we also made something that sorta acts like a compass-slash-map-slash-navigator..."
—Harper to Jesse's Gang. src

The Portal Atlas (also known as the Atlas), is an item exclusive to Minecraft: Story Mode that appeared in "A Journey's End?" and was originally created by The Old Builders.

The Portal Atlas appears to be a blue and yellow glowing book.

The Portal Atlas is a rare artifact that serves as a guide to the Portal Network and can be activated by simply saying where you want to go and opening it. Upon activation, it releases a torrent of ancient symbols which travel towards the holder's desired portal.

The moment after the Portal Atlas activated. 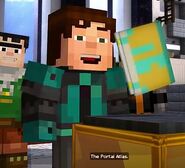 Jesse placing the Portal Atlas.
Add a photo to this gallery
Retrieved from "https://minecraftstorymode.fandom.com/wiki/Portal_Atlas?oldid=172159"
Community content is available under CC-BY-SA unless otherwise noted.