Looking for the food and item, Porkchop? 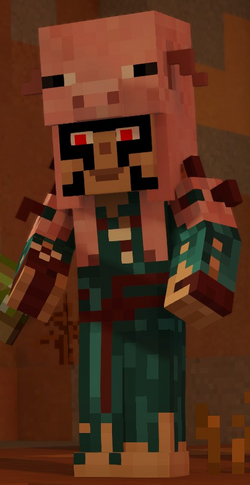 Leader of the Scavengers

"You think any of this down here is 'right?' 'Right' went out of the window with the rest of the sky!"
—PorkChop to Jesse about the bedrocking. src

PorkChop is the leader of the Scavengers and a character in Minecraft: Story Mode Season Two. PorkChop first appeared in "Below the Bedrock" and is voiced by Maile Flanagan.

Porkchop wears a pig costume, a tattered blue gown, and has red pupils. They also have what appears to be black face paint.