A Pig in Minecraft

"All pigs but Reuben shut up!"
—Jesse while looking for Reuben. src

Reuben, the only named pig in Season 1. 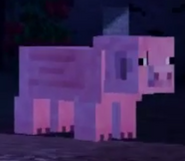 A wild pig in "The Order of the Stone".

Jesse, Lukas, Ivor, and Petra looking at a group of pigs.