A Pickaxe is a tool and weapon in Minecraft: Story Mode that is mainly used to mine stone-type blocks.

Jesse about to mine with a wooden pickaxe.

Petra with her iron pickaxe. 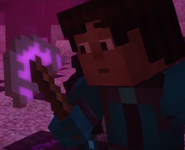 Jesse holding a pickaxe while defeating the Wither Storm.

Jesse being given two diamond pickaxes by Harper.

Jesse using a pickaxe to mine the obsidian stone underneath Hadrian, defeating him.

Crafting Recipe of a pickaxe
Add a photo to this gallery
Retrieved from "https://minecraftstorymode.fandom.com/wiki/Pickaxe?oldid=173170"
Community content is available under CC-BY-SA unless otherwise noted.