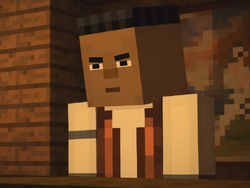 Phillipe about to flip the lever so Milo, Jesse, and Petra can get into Build Club. (Determinant)

Phillipe is a minor character in Minecraft: Story Mode. He first appears in "Order Up!".

Phillipe appears to be a dark-skinned male with short, black hair. He wears a white full-sleeved shirt and a brown leather jacket.

Phillipe is known to be the bartender at the Sky City inn, and he serves as a guard to Build Club. He first appears as somewhat shy and will run away if approached by Jesse upon first entering Sky City. He is one of the few known characters to not say anything and his personality is not greatly explored.

Phillipe running away from Jesse.

Phillipe running away from Hostile Mobs in Sky City.
Add a photo to this gallery
Retrieved from "https://minecraftstorymode.fandom.com/wiki/Phillipe?oldid=138718"
Community content is available under CC-BY-SA unless otherwise noted.