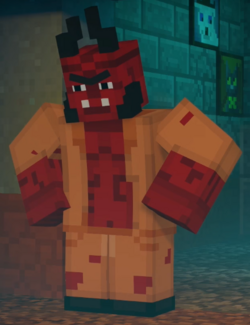 Oxblood finding Jesse in his room.

Oxblood is a "guest" of the Sunshine Institute and character in Minecraft: Story Mode Season 2. He first appeared in "Jailhouse Block" and is voiced by Gregg Berger.

Oxblood is an angry individual towards strangers and the "associates" of the Sunshine Institute, but is seen to be loving and caring towards his pet mooshroom, Geoff.

Oxblood loves and cares for Geoff, and worries for Geoff's well-being. And Geoff is a loyal pet to Oxblood, as seeing him follow Oxblood when he says so. If Geoff was sheared and turned into a normal cow, Oxblood is saddened and angry at Jesse.

Oxblood at first can be suspicious of Jesse. Later, when Jesse is given the choice of shearing Geoff or not, this affects their relationship. Oxblood is mad at Jesse, and almost attacks him/her for shearing Geoff if he/she does so. However, Oxblood can hug Jesse if he/she doesn't shear Geoff. 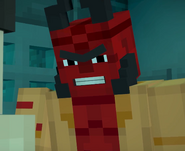 Oxblood talking to Jesse in the Mush Room.