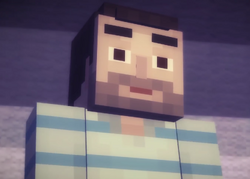 An announcer of the EnderCon stage

Owen is a minor character in Minecraft: Story Mode ​and an announcer at EnderCon. He first appeared in "The Order of the Stone".  He is voiced by Owen Jones.

Owen has a light gray/ white shirt with bluish gray stripes. He also has brown pants and black shoes.

He seems happy when he announces Gabriel the Warrior, but his personality is not much more explored.

Owen and Lydia in front the crowd of Gabriel fans.

Lydia and Owen about to announce Gabriel.