The Old Builders,
The Games

"And my job is to make sure everybody - even Hadrian - plays by the rules."
—Otto to Jesse in the Competitors' Village. src

Otto is a character in Minecraft: Story Mode, appearing in "A Journey's End?". He is voiced by Jamie Alcroft.

Otto appears to be a scholar who wears a green robe with golden rims. He also has a black colored collar, gloves, pants, and shoes. Due to his old age, he has a long white beard and eyebrows, but no hair. Otto is also dark-skinned, similarly to Harper. Additionally, Otto also appears to wear a white pin on his robe, presumably to hold it all together.

Otto is portrayed to be an intelligent and self-assured character who has a strong belief in following rules, and at first, he seems impassive and overbearing. However, as the story progresses, he proves himself to be a helpful and trustworthy character who resents corruption and accepts fairness. Of the trio of Old Builders, Otto is the only one who doesn't disfavor Jesse's Gang from the others, as if Jesse wins the Lava Race, Otto cheers for Jesse while Mevia and Hadrian clearly express their disappointment and frustration. He also helps Jesse and his/her group near the end of the game. Otto, like Hadrian, Mevia, and the Gladiators, seems to enjoy watching the games, but unlike them, he seems to sympathize with the competitors that Hadrian has trapped and enslaved. While Hadrian and Mevia are implied to oppress those trapped in the mines, Sebastian says that they sometimes get cake. Given the sadistic nature of everyone else running The Games, it is possible that Otto might sometimes kindly give the miners cake.

"Now you just say where you want to go... and the Atlas will show you the way."
—Otto to Jesse in the Portal Network.  src

"This is going to require some reconfiguring of the stats for sure..."
—Otto talking to himself. src

"Well, I'll in force the rules at any rate, can't be games without rules."
—Otto to Jesse. src

"You have fairly defeated them.... Seems only fair that you get to decide their fate. "
—Otto talking about Hadrian and Mevia to Jesse.  src

"I think you might be a real Tim in the making. Yup, a *real* Tim. "
—Otto to Jesse in the Competitor's Village. src

"Not since the days of Tim have we seen such heated play. "
—Otto to the Competitors.  src

"In fact, you're the most exciting thing to come to this place in a loooong time. A real wild card. "
—Otto to Jesse in the Competitor's Village.  src

"Jesse, with the power vested in me as an officiator of the Builder Games, I am proud to present-"
—Otto to Jesse. src

"I think If we can calm down I can explain"
—Otto to everyone. (Determinant) src

Otto with the other Old Builders.

Otto in the Competitors' Village.

Otto standing next to Mevia.

Otto sitting at the finish area for the Lava Race game.

Otto talking about his mistake in The Portal Network. 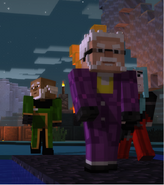 Otto leaving with Mevia and Hadrian at the end of the Lava Race.

Otto and The Old Builders talking to Jesse.