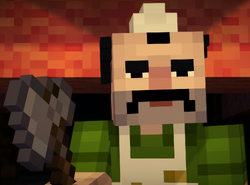 Otis in "The Order of the Stone"

"Well, I found him alone out in the woods, so I think that makes him *my* pig."
—Otis to Jesse. (Determinant) src

Otis is a character in Minecraft: Story Mode. He is a butcher who sells meat at EnderCon. He is voiced by Matthew Mercer.

Otis wears an olive T-shirt, a white apron, and a butcher hat. He has black hair, brown eyes, and a moustache.

Otis is a cruel man who takes his job very seriously. He is also manipulative, as he would rather make a trade with Jesse instead of just handing Reuben back.

"I don't know what you're talking about, chief! "
—Otis to Jesse. src

"Nothing sticks to your ribs quite like a juicy pork chop!"
—Otis to everyone nearby.  src

"I like the jowls myself. Just a fancy word for cheeks."
—Otis. src

"Oh, that's very nice. With this I could cut my butchering time in half."
—Otis upon Jesse offering him his/her Stone Sword. src