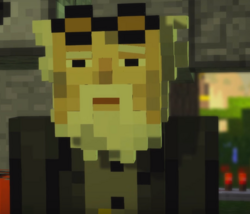 The Old Farmer Man is a resident of Redstonia. He appeared determinately in "Assembly Required" as the TNT Cannon inventor. He is voiced by Matthew Mercer.

Old Farmer Man is an avid redstoner and appears to be going deaf. He, like most others in Redstonia, aspires to become Ellegaard's protégé.

"What? Look, you're gonna have to speak up there."
—Old Farmer Man to Jesse. (Determinant) src