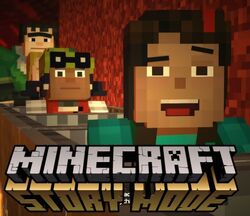 Jesse's Gang in the Minecarts

Nether
The Nether Minecart System is a system of Minecarts built by The Order of the Stone that can be used to travel quickly to various Nether Portals that lead to different parts of the Overworld.

The Minecart System stretches all over The Nether, allowing riders to go anywhere in the World very quickly.

The Minecart System consists of several bridges with rails placed on them and powered rails at several intervals. The System also has several challenges to be completed, such as reaching for a lever, high drops, twists and turns and jumps so that people cannot misuse it.

Axel in a minecart.

Rail switching in the system.

The Nether Portal junction leading to the Temple.