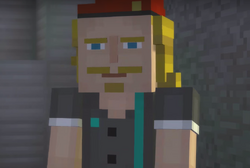 "Wait, was that you? Are you the bridge builders?"
—Milo to The New Order of the Stone. src

Milo is a character in Minecraft: Story Mode who first appeared in "Order Up!". He is voiced by Jim Meskimen.

Milo wears a grey shirt with blue suspenders, with a suspender fallen down. He also has a very short mustache and beard, and wears a red hat.

Milo is the Innkeeper of Sky City and was also the founder of the Build Club. Milo is portrayed to have a rebellious personality, as he did not like the restrictions put on the people of Sky City by The Founder, Isa. He believes that everyone should be free to do what they want, instead of having to follow Isa's laws. He is also portrayed as a good leader, who doesn't get along with Isa. He is unnerved by staring, because he can keep a club secret for countless years, but reveals everything just for Jesse to stop staring at him if Jesse does not say anything when they first meet.

"What are you talking about? We have to bring it to the people. With it, we'll finally be free of the Founder!"
—Milo to Jesse about Eversource. src

"You see, a long time ago I was just a citizen of Sky City, like any other. I wanted to make a Community garden, so I put in a petition for a Dirt block and Mercy me, it was Granted. But in my Excitement and haste to build my garden, I accidentally dropped my new block and it fell... right over the edge. For my crime, I was tossed into the Founder's dungeons... And I was in there for a very, very long time. I Grew to hate that Dungeon. "
—Milo to Jesse and Petra about Why he turned against Isa. src

"Before I can take you two any further, you must take an oath. You must swear to never reveal what I am about to show you."
—Milo to Jesse and Petra. src

"I assure you, harboring them is worth the risk! They are the epitome of Build Club material!"
—Milo about Jesse and Petra to other Build Club members. (Determinant) src

"Jesse has done nothing but help us so far! I will show you just how much I believe in Jesse's word!"
—Milo (Determinant) src

Jesse: "Hey! Both of you! Fighting isn't going to solve anything!"
Milo: "It will if I win!"
—Milo to Jesse, then arguing with Isa. (Determinant)

Milo asking Jesse if he/she is the one who made the dirt bridge to Sky City.

Milo backing away as Jesse is being arrested. (Determinant)

Milo with a Sheep.

Milo running with Jesse when Sky City is being attacked.