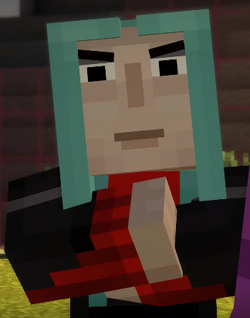 Enforcer of The Old Builders,
The Games (formerly)

"They're cheaters! Let's make their lives miserable, for fun!"
—Mevia to Hadrian and Otto about Jesse and Petra/Ivor. src

Mevia, also known as Mevia the Enforcer, is a character in Minecraft: Story Mode and the secondary antagonist in "A Journey's End". She is one of the Old Builders that were formerly in charge of the Games played by the Competitors. She is voiced by Kari Wahlgren.

Mevia has long pale-cyan hair. She wears a black and red dress with red shoes.

Mevia, being the Enforcer of the Games, is a greatly rude and overwhelming character. She is portrayed to be a right-hand woman to Hadrian and usually goes along with what he says, shares his attitude of superiority, and often insults Jesse and his/her Gang during the process. She is also very sadistic, and she enjoys belittling and taunting people she considers to be lower than her.

Much like Hadrian, Mevia is rude, snarky, snide, unpleasant, cruel, arrogant, selfish, and hot-tempered. When she's angry, she throws TNT at everything. However, Mevia doesn't have Hadrian's tendency to make and break deals and manipulate people. It can be said that while both enjoy watching the competitors in the Games suffer, Hadrian prefers to toy with their hope, while Mevia simply enjoys watching the Games and the competitor's suffering.

As mentioned above, Mevia is highly sadistic, as evidenced by her quote: "They're cheaters... Let's make their lives miserable, for fun." She seems to have little, if any respect for others, taunting them and even pushing and yelling at Hadrian. Despite this, the two of them fight quite well together, as shown during their final battle with Jesse. At one point, Hadrian pretends to ask Jesse for forgiveness while Mevia sneaks up behind him/her and brutally murders him/her. This shows that, like Hadrian, she has no sense of honor and is perfectly willing to attack someone while their guard is down.

Mevia also has a comedic side, as shown during the post-credits scene which shows Mevia and Hadrian trapped in a barren world made of bedrock inhabited by (depending on one of the player's choices in Episode 1) either chicken-sized zombies or zombie-sized chickens. Mevia tries to crack a joke about their predicament, which falls flat.

During a final standoff between Jesse and the Old Builders, Hadrian and Mevia attempt to trap Jesse by surrounding him/her with obsidian. However, Jesse uses his/her two pickaxes from Harper to break through the obsidian, much to Mevia's surprise. Jesse forces her back towards the elimination area, and she eventually falls into the piston traps.

"That's right Hadrian, and it looks like we're just gonna have to wing it. "
—Mevia to Hadrian in the wasteland of giant chickens. (Determinant) src

"How's it going?"
—Mevia to Clutch and other Gladiators. src

"Lashing out just because your friends were eliminated. "
—Mevia to Jesse. src

"Obviously! They come back and then we have them to go work in the mines!"
—Mevia to Jesse. src

"That's right Hadrian, and it looks like they're dying to meet us.""
—Mevia to Hadrian in the wasteland of tiny zombies. (Determinant) src

"This runt needs to pay for ruining our fun!"
—Mevia about Jesse. src

"Why you little...!"
—Mevia, after Jesse insulting her. (Determinant) src

"Not gonna happen, chump."
—Mevia to Jesse when he/she says it's time for them to be eliminated. (Determinant) src

"Seems unlikely. We don't beg, sport."
—Mevia to Jesse when he/she says that they will beg for a deal. src

"They all end up in the mines."
—Mevia to Jesse. src

"Now it's been fun, really, but I think it's about time we end this!"
—Mevia to the Competitors. src 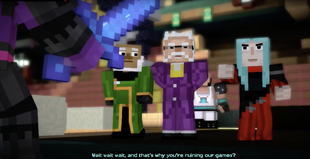 Mevia with Hadrian and Otto talking to Jesse. 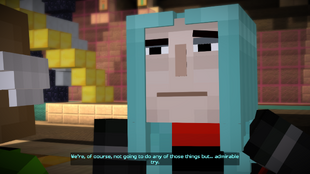 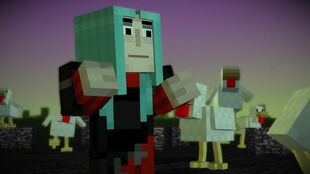 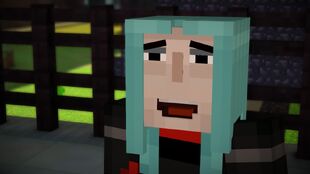 Mevia in the respawn pit.

Mevia with Hadrian and Otto. 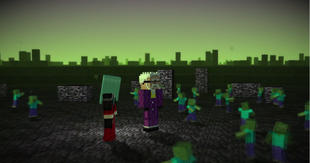 Mevia and Hadrian in the tiny "adult" Zombie dimension. (Determinant) 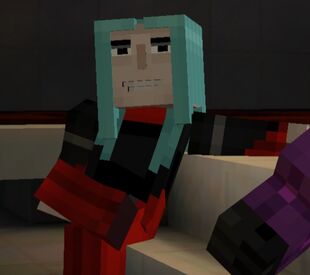 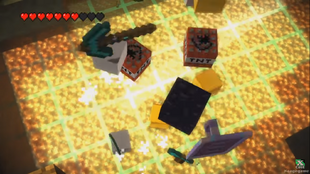 Mevia's inventory after being eliminated by Jesse